Empowering students, faculty and staff with disabilities, Lars and Tanja demonstrate how automated document conversion and remediation service SensusAccess can convert documents into a range of alternate formats such as Braille, e-books, digital large-print and audio. The service can also convert inaccessible documents into better accessible formats.

Lars Ballieu Christensen works in technology and design for people with disabilities. He advises government, organisations, and academic institutions on accessibility and inclusive design. He is the inventor of a range of innovative technologies that support inclusion, including the award-winning RoboBraille service.

Tanja Stevns works with education and technology to support the inclusion of people with disabilities. With more than 27 years of experience working at the Danish National Center for Blind and Partially Sighted Children and Youth, Tanja is a special education teacher and speech therapist, specialising in visual impairment and general learning disorders.

Lars kicked off the session with an introduction to SensusAccess, the self-service alternate media for educational institutions.

SensusAccess provides a service for educators, students, staff and alumni that converts documents into alternative formats to cater to the user’s preferences and needs.

Lars described SensusAccess as first of all, an automated service that provides a tool for individuals, with or without disabilities, to upload documents and choose themselves how they would like them converted with a range of alternative formats to choose from, such as MP3, DAISY, e-books and Braille.

In addition, SensusAccess acts as a remediation tool for inaccessible documents, as well as a point of production for educators and facilitators producing learning resources for students.

Lars described the high-level objective of SensusAccess as a service to elevate the independence and self-sufficiency amongst people with disabilities, to promote inclusion within mainstream education environments.

He noted that on an individual level, SensusAccess aims to empower individuals from all backgrounds and abilities. They do this by providing the freedom to choose the methods to which they access and navigate their learning tools and resources.

Lars explained that SensusAccess licenses their service to institutions so that conversion services and accessibility support is available to all, including students, staff, faculty, and alumni, both on campus and off.

Who are the SensusAccess Users?

Although SensusAccess is a service open to all, Lars described how they would consider their primary users to be individuals with disabilities. He then went on to illustrate the other profiles of their various users. 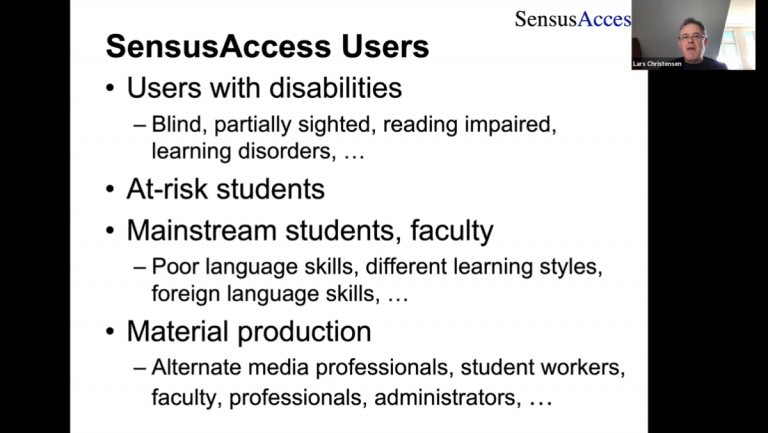 Lars expressed that from a technical point of view, SensusAccess is a collection of well-known technologies put into one place, with a series of accessible user interfaces around it.

Prior file conversion expertise is not required.  Their service consists of several automated workflows to ensure ease of access for all users.

The original interface of SensusAccess was email-based. Users forward their documents as email attachments, and in return receive the converted result. For every converted document, the user is given seven days to retrieve the file before it is automatically deleted. Lars remarked that this interface was highly efficient and remains a service today at SensusAccess.

The most commonly used interface of SensusAccess is the web-based interface. This was the service’s first implementation in higher education and was built together with Stanford University in California.

Lars also spoke on a series of IMS LTI integrations they released. These are integrations that place SensusAccess as a conversion resource within the major learning management systems, such as Moodle, Canvas, Sakai and so on.

And lastly, Lars discussed the SensusAccess API. The API is available for other parties to utilize the conversion service within their solution. Here Lars gave the example of integration of SensusAccess into the Brickfield Accessibility Toolkit for generating and remediating files into accessible formats. Check out the Brickfield website to learn more about this team-up! 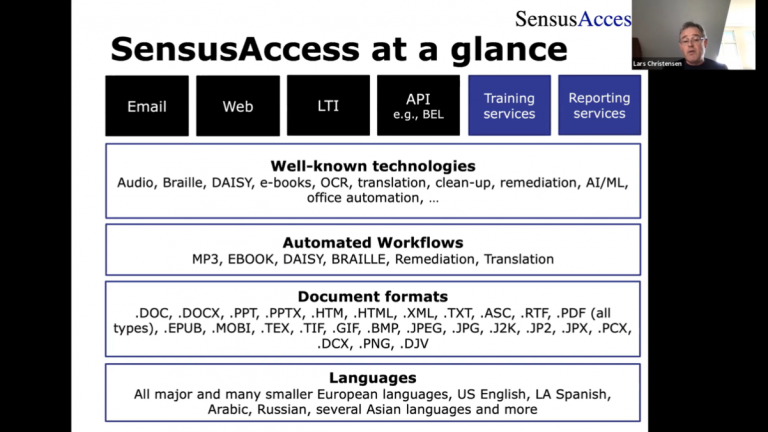 Audio conversion for features for the following languages:

Using an example of a 40 page image-only PDF text document, Lars closed the presentation with a step-by-step demonstration of how to navigate the SensusAccess solution for file conversion and remediation. 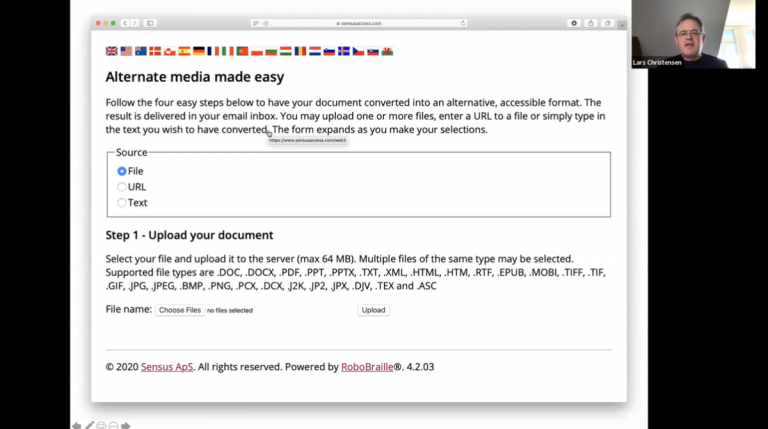 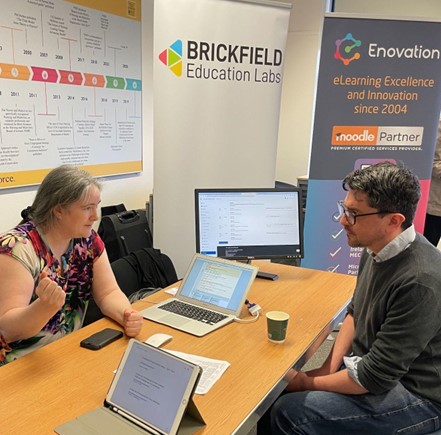 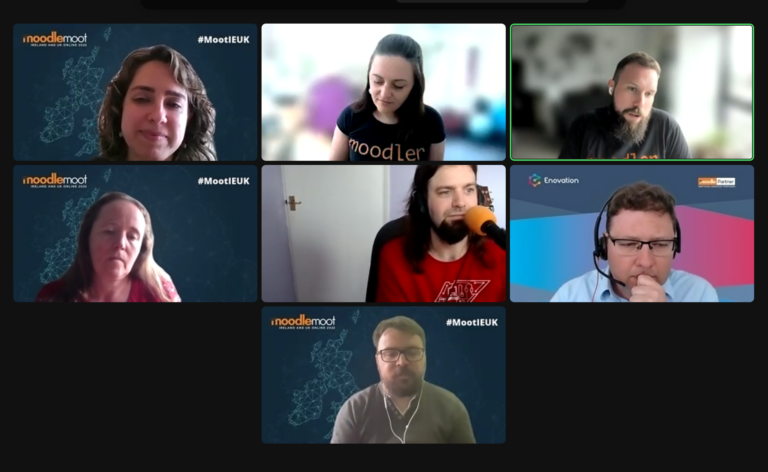 Reflections on MoodleMoot UK and Ireland 2022​ 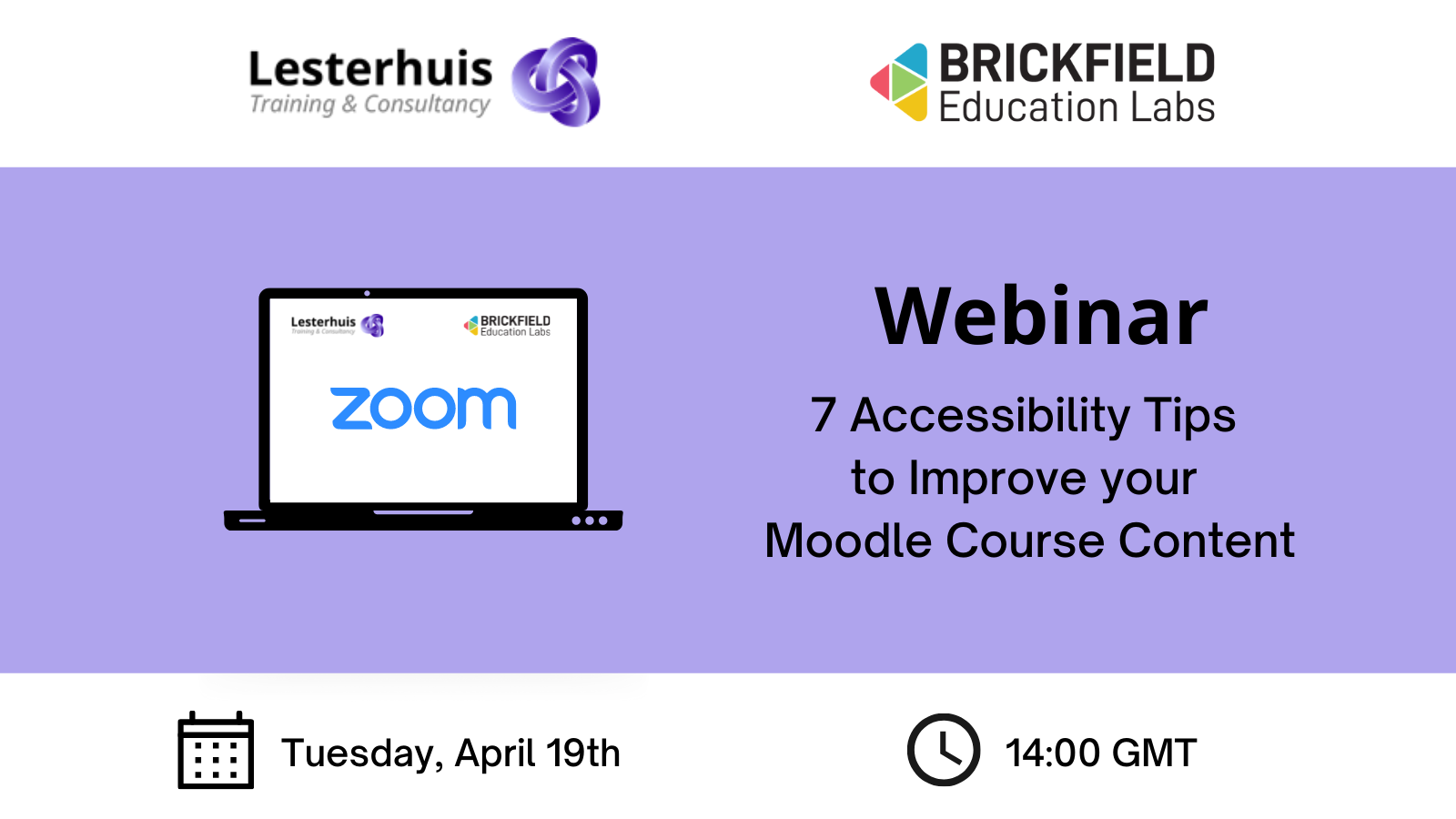